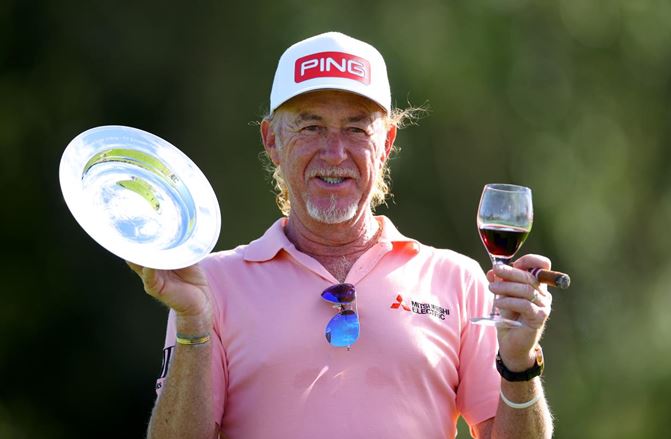 The 56-year-old overtakes Sam Torrances record of 706, the Scot having made his final appearance on the Tour in 2010. Jiménez celebrated reaching the milestone in style, carding a bogey-free eight under par round of 64 to sit two strokes behind his compatriot Sebastian Garcia Rodriguez at Forest of Arden Marriott Hotel & Country Club. The Malaga-born player already holds the record for the oldest player to win a European Tour event, courtesy of his most recent victory at the 2014 Open de España  which he won aged 49 years and 337 days. He had first beaten Des Smyths record at the Hong Kong Open in 2012, before defending that title a year later to extend it for the first time, and then extending it further on home soil in 2014. Jiménez also holds the record for most holes-in-one on the European Tour, his ace at the 2015 BMW PGA Championship taking him to a career total of ten, beating Colin Montgomeries nine. A 21-time winner on the European Tour  tied for tenth in the list of all-time winners alongside none other than Torrance  Jiménez made his debut on the tour in 1983 at the Spanish Open. Six years later, he enjoyed his Rookie season on the continental circuit and his maiden victory came at the 1992 Belgian Open, beating Barry Lane  who is third in the list of all-time European Tour appearances  by three shots, while his compatriot Seve Ballesteros finished a shot further back. His 21 victories include five on home soil, four in Hong Kong and one at the prestigious BMW PGA Championship at Wentworth Club. Having made his Ryder Cup debut relatively late in a celebrated career, becoming a Rookie aged 35 at the 1999 edition at Brookline, Jiménez represented Europe a total four times in golfs greatest team event. He would lift the famous trophy on two occasions, first in 2004 at Oakland Hills under the victorious captainship of Bernhard Langer, and then in 2010 at Celtic Manor Resort  as Colin Montgomerie captained Europe to victory  where one of Jiménezs two points came courtesy of a crucial Sunday Singles victory over two-time Masters Tournament winner Bubba Watson. Jiménez has also been Vice Captain for two winning Ryder Cup teams, first under Ballesteros at Valderrama Club in 1997 and then under Paul McGinley in 2014 at Gleneagles. He has carried his lasting success into the over-50s circuit, picking up two Senior Major titles including one at the 2018 Senior Open Championship presented by Rolex  when he overcame Bernhard Langer after a thrilling battle at the Home of Golf, St Andrews. He also holds seven further titles on the over-50s Tour in the USA. David Howell is the closest active European Tour player to Jiménezs record of 707, the Englishman making his 636th appearance at this weeks Hero Open. Jiménez said: Its been a wonderful day, eight under par. A beautiful summer day, and especially on the 18th green with all my colleagues. I felt very emotional. I enjoy everything about my life here. Its not the first time Ive said it, this is a way of living. Golf is my life, you never remember any bad moments. You can understand that youre not going to be in a perfect mood and not make a perfect score every time. You can have a bad game, but not a bad day, thats the difference. Keith Pelley, Chief Executive of the European Tour, said: I would like to congratulate Miguel Ángel on behalf of everybody at the European Tour for this monumental achievement. To play 707 times on the European Tour is a testament to his determination, his spectacular talent and an enduring passion for our game which is clear for all to see every time he tees it up. He is a hugely popular figure amongst our players and fans, and I know he will continue to entertain and inspire for many years to come.