18 Hole Par71 Course, Driving Range, Short Game & Putting Green Facilities
Over its long history, the course has seen many changes. For the first 20 years, it was situated on West Cliff before moving to its current site on East Cliff in 1911. It became an 18-hole course in 1921 and since then has witnessed further alterations, the last major one being in 1989 with the acquisition of additional land on which has been built todays 1st, 9th, 17th and 18th holes and the new Clubhouse. An outstandingly beautiful vista awaits all who play the course with scenic views not only over the sea and shore but inland to the two highest points in Dorset, Pilsdon Pen, and Lewesdon Hill. The course abounds with wildlife and the singing of a skylark is a regular sound to be heard. The signature hole, the 6th, is only 129 yards long but has a drop of over 90 feet with one commentator rating it in the top 100 holes in the world. A dry-stone wall features on four of the holes, one of which is the 371 yard 13th. The legendary Max Faulkner drove the green (365 yards at the time) in an exhibition match in 1952. With a variable wind, changing weather and a challenging course, a round at Bridport is a test for all levels of golfer.
Practice Facilities
Here at Bridport and West Dorset Golf Club we have available the following practice facilities: Driving Range - Covered and Uncovered Bays Short Game Area Putting Green 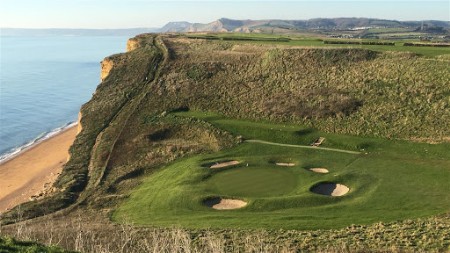