Hawick Golf Club, the oldest golf club in the Borders,
has been in existence since 1877.

Located on the picturesque Vertish Hill on the outskirts of Hawick, where the famous brands of cashmere garments of Peter Scott, Pringle, Lyle and Scott, are produced.
This old and well established golf club, lies in the beautiful borders of Scotland, with its rolling heather clad hills, and the Rivers Tweed, and Teviot, running through wooded valleys to the sea, along with centuries of history, castles, abbeys, and watchtowers.
Nick Faldo (who holds the professional course record of 64), Colin Montgomerie, and Tony Jacklin, are all honorary members.
Thanks to its high elevation, Hawick Golf Course offers some of the most spectacular views to be found in the Borders. This becomes more evident as the course climbs from the 4th Tee, and meanders around the natural contours of the Vertish Hill.

The The Vertish Hill is easily found at the western perimeter of the town and is clearly signposted from the main street."Vertish", with its subtle natural hazards, is a true test of a golfer's ability and offers the handicap player a fine few hours of enjoyment. Above all, the desire to step right back onto the first tee after leaving the last green.

The 388-yard 14th hole looking towards Ruberslaw and the further Cheviot Hills, offers only one of the many spectacular views from the picturesque Vertish Hill course. 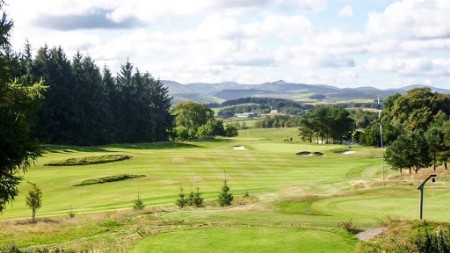