Bacup Golf Club is situated at over 1000 ft above the Rossendale Valley and the small town of Bacup. From the beautiful, well-kept course you have far-reaching views of the picturesque, rolling East Lancashire Pennine Hills.

Bacup Golf Club is one of the oldest clubs in the area, having celebrated its Centenary in 2010. It has a thriving playing section that is always pleased to welcome visitors.

After golf you can relax in the well-appointed clubhouse with a drink and, during the open season, a snack or meal.

Bacup Golf Course was founded in 1910 when prospective members called a meeting with the Town Clerk to request an outline scheme to form a golf club. This first opened at Cowtoot Farm, Bacup and on 28 May the first committee was elected. On 2 July 1910, the Mayor of Bacup, Alderman John Henry Maden, J.P., C.C., also President of the Club, officially opened the course by driving off in a friendly match with Mr Joseph Entwistle, the first Captain of Bacup Golf Club.

In 1916, the club moved from Cowtoot to the present site on Bankside Lane. In May 1923, New Barn Farm was constructed to serve as a clubhouse at a cost of about £650. This was situated between what is now the 5th green and the 6th tee. For almost 16 years, the club flourished here until the early hours of the morning of 19 January, 1939 when fire reduced the clubhouse to a charred shell. The Steward and Stewardess with their 10 year old son were lucky to escape. After only fifteen months following the fire, Alderman George Baron officially opened the present clubhouse. Mr J. H. Brearley, a founder member of the club, and his son, Mr James Brearley, carried out the construction of the building. On Thursday, 18 July 1946, at an auction held in the Market Hotel, the 54 acres of land that made up the course were purchased for £1,850. It was after this purchase that, on 27 November 1946, Bacup Golf Club became a limited company.

The Clubhouse has been altered and extended over the years and, after purchase of land on the far side of the public road to the east of the course in the 1980s the 8th/17th hole was changed from a par 3 to a par 4 and the 9th/18th holes were completely altered. 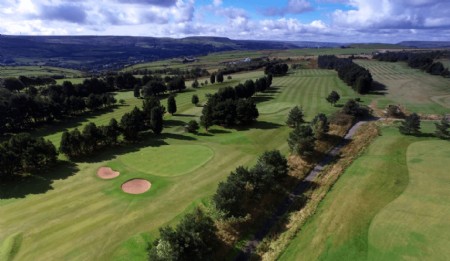