The course measures a challenging 6523 yards from the Championship tees and 6317 yards from the medal tees. The course has four par 4 holes of over 400 yards and four par 5s. Its tight fairways, lined with an abundance of heather, gorse and trees, put a premium on accuracy but its biggest defence are its greens, true and fast with subtle breaks and borrows. They are among the best in southern England. With its undulating fairways, heather, gorse and trees the course is outstandingly beautiful. There is a profusion of rhododendrons in the spring. Well manicured throughout the year, the course retains its heathland character with fast-running fairways and greens.

The Course was designed by Arthur Croome in 1922 and finished after his early death by his partner Tom Simpson. Both were supporters of the Strategic as opposed to the Penal school of course design meaning that the golfer is rewarded for course strategy rather than long hitting. In 2020, five new holes remodelled by Tom McKenzie were opened for play.  These new holes remained faithful to the original design philosphy but enhanced the layout and greatly increased the strategic challenge to players of all abilities. 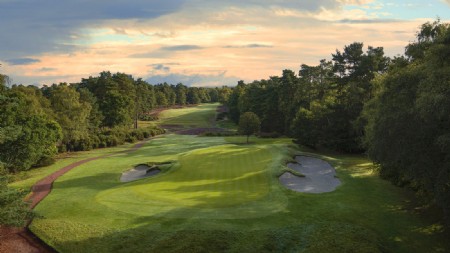