Calcot Park is an undulating, traditional, parkland course rated in the top six golf clubs in Berkshire and is recognised as one of the best in the area. It was designed by Harry Colt in 1930 who also built, amongst others, Beaconsfield, Denham, Stoke Park, Sunningdale Old, Swinley Forest along with the East and West courses at Wentworth Club in Surrey.

The 18-hole course, Par 70 and SSS 71, is 6,300 yards off the White Tees and is acknowledged as a demanding, yet fair test of golf. There are two practice areas for up to a six iron and a third area for 'some' drivers.  There are two par five's, both reachable in two by strong hitters and four excellent par three's, including the 7th, our signature hole, played across a lake to an elevated green.  The 13th is played across a stream in a shallow valley to a contoured green.

The course opens and closes with two, long par four's. There are three small practice areas, practice nets and two practice chipping and putting greens. Calcot Park has an abundance of mature trees and shrubs and the area surrounding the course are home to a variety of wildlife including badgers, foxes and deer. 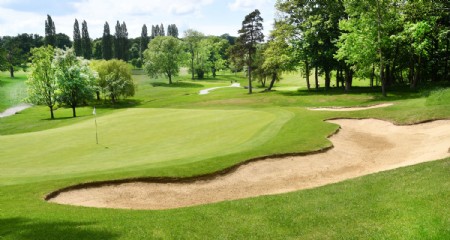