From its peak viewpoint Darwen Golf Course has panoramic views of the surrounding area as far out as Blackpool and cascades down into the shadow of Darwen Tower.

Established in 1893, Darwen Golf Club has now become recognised as one of the best courses in the area and one of the most challenging in the North West, with a course par of 71 and 6218 yards of drifting lifts and drops. The front nine is a jewel by any standards and has many water features, which in summer are abound with lilies and aquatic plants.

Whilst undulating, the front nine is in more of a parkland setting and is a pleasure to play, not too demanding but still challenging. The back nine is the more undulating and moorland of the two halves, with some challenging holes for all levels of golfer. The views from the higher levels on the back nine are breathtaking, with the Ribble Estuary, Blackpool Tower and the Big One, easily visible on most days.

The surrounding countryside is also stunning with Darwen Tower, built in 1897 to commemorate Queen Victorias Diamond Jubilee, dominating the landscape and visible wherever you are on the course. 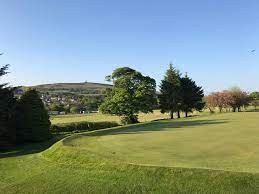