As its name implies, the clockwise loop of nine holes initially follows the Shoreline south towards the Lodge at the entrance to the course. The opening drive is straightforward but a par 4 is still quite difficult to achieve. In contrast the drive at the par 5 second required the longest carry to the fairway of any hole at Princes. With its severely undulating fairway the fourth is a daunting hole even for the best golfer. The 5th is the post war 18th playing to the same green where Gene Sarazen won the 1932 Open Championship. The 6th begins the return north to the new Clubhouse, an accurate tee shot must be followed by an even more exact second to find the elevated green which slopes steeply to the right. Club selection can be difficult at the par 3 eighth and a par at the last is often hard to achieve. The clubhouse flagpole is an excellent aiming point for the drive which should best find the far right of the fairway to open up the approach to the green.

The Dunes forms an anticlockwise loop of nine holes five out in a southerly direction to the boundary of Royal St. Georges and four back. The dog-leg 1st hole is arguably the most difficult on the course with a narrow green , tricky to hold even with the shortest of approach shots. The par 3 second offers only temporary respite before three very testing holes particularly the 4th and 5th both challenging par fours. The 6th tee affords fine views across both golf courses and is the start of the excellent par 5 with hazards both left and right of the green for those choosing to go for the green after a good drive. The approach to the 7th can be difficult to judge whole the par 3 eighth calls for a long and accurate tee shot. Two good shots are required to find the final green which was resited in 1985 when the central Clubhouse was build, the original green now being one of the practice green.

The members favourite nine has undergone a major upgrade. Renowned architects Mackenzie & Ebert have reimagined the Himalayas course.  These changes are most visible on the 2nd hole, which has been combined with 3rd hole to produce a sweeping par 5 around wetlands to the old par 3 green. The 3rd, previously a short par 4, sees the addition of 3 new bunkers down the left hand side and the ditch on the right hand side has been enlarged into a wetland. the jewel in the crown is the new par 3 'Bloody Point' located at the far end of the course, this short hole, set against the backdrop of the sea requires an accurate tee sot to the raised green. the walk from the 5th green to the 6th tee alongside the beach, gives the golfer a little respite before taking on the mammoth par 5. The 7th Himalayas sees a slight tweak with a sand scrape added on the left side but this par 3 which affords a swift return to the Clubhouse after seven holes as well as nine. It is the shortest nine only because it have just one par five. From the first tee the ball should be positioned just to the right of the left hand fairway bunker and the dog leg second incorporates the most steeply sloping of all 27 holes.

The 4th and 8th share of one of the dew Championship double greens outside the Old course at St. Andrews. The 6th is the courses longest hole at 580 yards, a genuine par 5 for all golfers with a new marshland water feature. The tee of the par 3, 7th affords a spectacular view across Pegwell Bay. From elevated tee to elevated un-bunkered green, into the prevailing south westerly wind the tee shot can require a drive if the wind is strong yet only a short iron with a following north easterly breeze. The closing tee shot from the highest tee on the course is similarly affected but the wind and the green, positioned almost underneath the Clubhouse balcony is protected by the Sarazen bunker that collects any overdrawn shot. 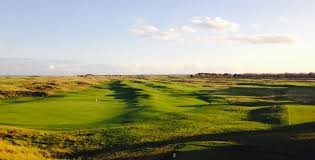