The Dunluce Links is rated as one of the most challenging and spectacular links courses in the world, and has undergone major changes as part of preparations for the 148th Open.

The original architect was the famed Harry Colt who produced breath taking golfing landscape beside the Atlantic Ocean on the North Coast of Northern Ireland, and which commands distant views of the hills of Donegal in the Irish Republic, and the island of Islay, 25 miles away in the Inner Hebrides of Scotland.

The Links is named after the nearby ruins of the medieval Dunluce Castle located on the edge of a basalt outcropping overlooking the sea between Portrush and Portballintrae.

In order to meet the demands as a modern day Open Championship venue, significant changes were carried out to the course under the stewardship of the golf architect Martin Ebert of Mackenzie and Ebert.

Works commenced in November 2015 and for the next 18 months, and the shifting sands gave way to the building of five new greens, eight new tee boxes, 10 new bunkers and the creation of two new holes, the 7th and 8th on land which was once part of the Valley course.

The uphill par-5 7th is called Curran Point, named after a stretch of beach which runs parallel on the East Strand. The 8th which runs in the opposite direction is called Dunluce, and they replace the old 17th and 18th on ground which has been temporarily set aside as the site for the Opens tented village.

The new Championship Links has been lengthened by 130 yards to 7,317 yards, and another special feature of the altered layout was the excavation of thousands of tonnes of sand to build a 180 feet underground tunnel of fabricated steel.

The Dunluce Links is home to one of the most stunning par fours in golf, the 382 yard 5th hole. A dogleg hole played from an elevated tee towards the ocean, it rewards the daring shot across a wide expanse of rough. Be careful though, as an overly long approach shot will end up on the sand of the White Rocks beach which lies just beyond the rear of the green. Make sure and take a moment to enjoy the stunning views from the green towards the 15th Century Dunluce castle and the surfers braving the swells below. Calamity Corner, the 236 yard par 3 16th Hole is a must play for any follower of the game. Between the tee and the green is a yawning chasm, which must be cleared to stand any chance of making your three. It is hard to describe the feeling as you stand on this tee, looking out across the Valley links below, knowing it will take a fantastic shot to hit the small target across the void.

The Valley Links, as the name suggests, lies between the East Strand and the higher ground of Dunluce Links, and is the traditional home course of Royal Portrush Ladies Branch, and Rathmore Golf Club whose members live in the Portrush area.

It is an outstanding links originally designed by Colt, and which has also undergone major changes under Martin Eberts supervision.

There is a new par-3 15th, par-3 17th and the par-4 18th where the tee box has the backdrop of Skerries, a small group of rocky islands just off the shoreline, and also withinsight of the birthplace of the late Fred Daly, who began his career as a Royal Portrush caddy before going on to win the 1947 Open Championship at Royal Liverpool.

Even though this course tends to be overshadowed by The Dunluce Links, the Valley has been critically acclaimed by visitors and golf writers from across the world.  They hold the belief that no visit to Royal Portrush is complete without playing those 18 holes as well. 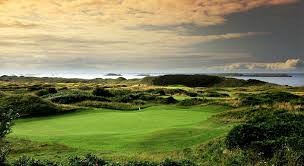