Opened in 1992, Eden has matured into an extremely attractive golf course receiving great praise from visiting golfers for its immaculate condition, beautiful environment and above all its ability to test golfers without being unfair.

The fairways wind their way through the fifty acres of woodland around which the course is designed although tremendous views of the Pennine and Lakeland fells are still afforded on various parts of the course.

The river Eden is very much a hazard on holes 4 and 5 where a sliced ball is not advised. Water is in play on several other holes including the short par four 11th, where a good drive might be on the green but the slightest deviation will lead to a dropped shot.

On the whole the course design welcomes the driver with most fairways open enough to tempt the ambitious. However, the ever present threat of timber will catch out the reckless. The opening nine is marginally easier than the back nine where the testing 14th and 15th can be a challenge to your card just as your concentration is beginning to wane.

Wildlife are numerous on the course with families of swans nesting on the lakes as well as mallard, moorhens, hares and the occasional roe deer.

The course holds several county and inter county events each year and tends to be home to the county squad through the winter.

When the opportunity arose to purchase neighbouring land, plans were developed to build a further nine holes at Eden. The new course offers a contrast in style to the existing eighteen.

The course covers one hundred acres which includes some tremendous specimen trees as well as steep gullies and undulations which are brought into play on several holes.

Whether played on its own or as part of a 27 hole day, the 3262 yard par 36 new course will greatly add to the appeal of a day out at Eden. 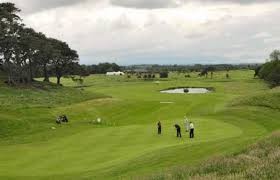