The Vale of Llangollen GC has been awarded Gold Status by the HSBC ranking system and is regarded as the top inland course in North Wales.

The standard scratch of 73 makes it a tough challenge from the back tees, even to the many County and Welsh National competitions held at our magnificent location.

The river holes at 9, 15 and 16 are outstanding and the 9th is regarded as one of the best holes in British golf. The 18th makes for a memorable finishing hole which looks simple but can prove testing in front of all your "friends" watching from the decking above.

Of course, with such a beautiful setting on the valley floor beside the River Dee and overlooked by the glorious Welsh hills, even a bad round will seem enjoyable.

The Vale of Llangollen Golf Club was formed back in 1908 by some of the local gentry and has been extended and improved ever since.

It is a members' club whose aim is to provide affordable golf of the highest standard to its members and customers. The quality of the course has led to it being a favourite venue for golfers right across the UK and even further afield, but in particular from the cities of the North West and West Midlands. They come to play, to enjoy our hospitality and can stay at one of the many hotels in the town.

We are located in an area of Outstanding Natural Beauty (ONB) and within the designated area of a World Heritage Site (The Froncysyllte Aquaduct).  As far as we know, there is NO OTHER golf club in the World to have such a unique pedigree.

Our championship course, with its manicured fairways and superb greens, nestles on the banks of the River Dee and is overlooked by the glorious Welsh hills. The Vale of Llangollen is regarded as one of the top golf courses in Wales and it has become a highly favoured venue for many County, National and Professional events.

We frequently host major Golf Union of Wales events and in recent years have hosted:

2019 sees us hosting the R & A Regional Final of the Ladies Coronation Foursomes which clearly attests to the quality of our offering.

However, even if you are not of a competitive nature, our setting and tranquillity will more than compensate your game and our outside decking area with its stunning views will surely make your post-game drink and food taste even better! 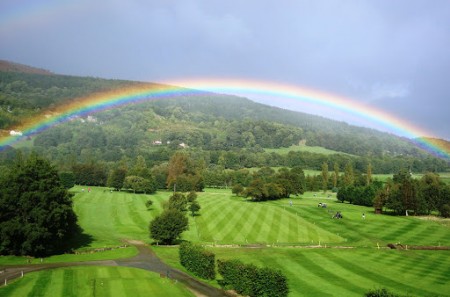