The course is less than 2 hours from Dublin, under an hour from Belfast and only 30 minutes from the world renowned Royal County Down golf links at Newcastle.

Our course is a true test of golf.  With the almost ever-present wind capable of wreaking havoc from any quarter; the hard fairways and the small firm greens, it is just about impossible to play "yardage based golf on this links.

The Irish Sea, which can be seen from all 18 tees and greens, comes into play on no fewer than 8 holes.  This is just one of the memorable and unique features of the links at Ardglass Golf Club.

We have the oldest building used as a golf club house in the world. The present building started its existence as a fortified warehouse that operated as a safe haven for 15th century importers and exporters. The initial construction of the castle started no later than 1405 and by the 18th century it was converted into a family home, with a new extension being completed around 1788.

However, as the harbour was in use by the Norman knight, Sir John De Courcy, at the time of his invasion of Ireland in 1177, it is entirely possible that the clubhouse sits on even earlier footings.

Today we are fortunate to have this distinctive building as our clubhouse.

The story of Ardglass Golf Club and links began in 1896, under the leadership of the Rev Thomas MacAfee. The first incarnation was a 7-hole layout with a total length of less than 1000 yards and shoehorned into the area that is now our 1st and 18th fairways.

Over the next 100 years our Club leased and then purchased the additional land that stretches out to Ringfad Point and around to the original Coney Island Bay.

In 1907 it became a 9-hole links and was basically to remain unaltered for the next 60 years.

In the late 1960s, with the additional land, the layout expanded to encompass our first 18-hole layout.

A generation later, the latest tranche of land was acquired.  The Club developed the lands around Coney Island Bay and remodelled the course to provide the stunningly natural links we enjoy today.

Ardglass Golf Club does not stand still, and even today we are continuing to upgrade and improve the current layout to make it fair, enjoyable and a challenge for golfers of all abilities. 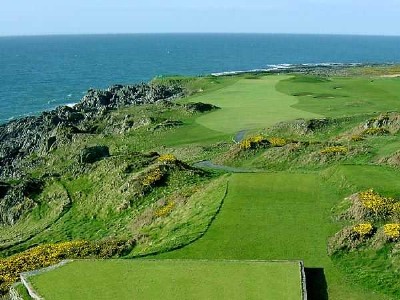