County Armagh is a beautiful 18-hole course set in Georgian parkland with magnificent panoramic views of the historic City and its surrounding countryside.

The Club is one of the oldest in Ireland, formed in 1893 under the auspices of the Armagh Archery and Lawn Tennis Club. In that year it was generously granted the use of the land in the Demesne by Mr George de la Prev. Beresford, rent free. When the land  some 350 acres - was sold in 1916 to the Diocesan Council for a very reasonable sum, the club was granted an annual tenancy at a nominal rent.

Since that memorable day landscaping has matured the course, major alterations have taken place to the second and 18 th holes and further improvements made to the greens and tees. Throughout the Georgian demesne, free-standing oaks, chestnuts, beech and ash trees line the carefully manicured fairways, with testing bunkers, leading to superb greens, many of which are defined by lush floral displays which blossom beautifully in spring and summer.

In 1993 County Armagh Golf Club celebrated its centenary. Its course has fulfilled the dreams of the visionaries and hosted many Provincial and National Championships.

Today County Armagh Golf course is widely considered one of the best parkland courses in Ireland, with every hole featuring a different layout, requiring a variety of shots to challenge and delight every golfer whatever their handicap. Indeed it provides an intriguing test of skill, evidenced on occasions when the Club has hosted major amateur and professional golf championships. 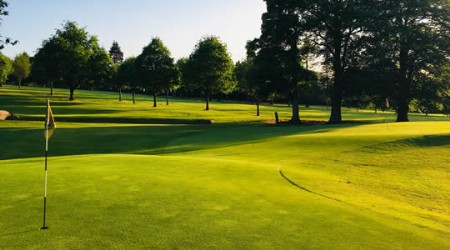