Taymouth Castle Golf Club was established in 1925 playing on the course designed by James Braid set in the grounds of Taymouth Castle near Kenmore, situated in the heart of highland Perthshire. As well as being a five time winner of the Open Championship James Braid was a renowned designer of over 200 golf courses, and Taymouth continues to be a fine example of his work.

The course is laid out in the former deer park of the Taymouth estate within the valley of the river Tay. As well as offering some testing holes, the course affords spectacular views of the surrounding countryside including the peaks of the Lawers range, the sparkling waters of Loch Tay, and the wooded slopes of Drummond Hill.

Although the present building largely dates from the 19th century, Taymouth Castle stands on the site of the ancient Balloch Castle which was built in 1550 for Sir Colin Campbell of Glenorchy. Over the years, the castle has seen use as a hotel, a school, a hospital for Polish servicemen and a civil defence training establishment.

In November 2010 the Taymouth Estate was purchased with the intention of developing the Castle into a luxury hotel and also creating leisure and residential properties around the Estate. These plans include extensive remodelling and upgrading work to the golf course which commenced in February 2011. 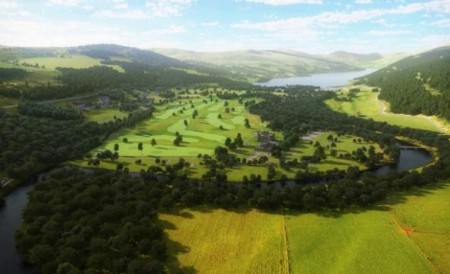