Situated in the heart of the Home of Golf since 1908, Muckhart Golf Club has long boasted a position on the list as a must-play courses in Scotland.

With three 9-hole courses offering variety in both setting and challenge, we have something for everyone  from world-class golfers to social enthusiasts. The stunning Ochil hills provide an incomparable backdrop on every hole and all three courses are cleverly designed, bringing out the best of the local scenery as well as utilising the prevailing weather conditions to provide a fair test of golf.

Thanks to a friendly welcome and a warm atmosphere, Muckhart Golf Club welcomes visiting groups and societies every year. Our Open events  Junior, Senior, Ladies, Gents & Mixed  are often oversubscribed, guaranteeing that our reputation is spread far and wide.

The Club was founded in the early 1900s when the local Minister, the Rev. J Edgar Cairns, appreciated how limited the sporting facilities were in the community. With the assistance of local benefactor, Miss Christie, who provided fifty-five acres of land, the original nine holes were created by J B Wyles of Dollar. The course was opened by Miss Christie on the 28th May 1908, by driving a ball down the first fairway.

Membership, back in 1908, was One Pound per family per annum. Miss Christie donated the first trophy, a Rose Bowl called the Christie Cup, which was first presented in 1908 to a Miss Annie Lawrie.

During World War II the course fell into disrepair, as there was a desperate shortage of grazing land available. All the greens, fairways and tees disappeared being set aside for rough grazing for sheep. It was a Mr Jack Turner, who having been "demobbed took on the task of restoration. With the help of pre-war players the course was rediscovered and slowly renovated.

In the late 1960s the committee applied itself to extending the course to eighteen holes, by leasing land from the then Lord Lieutenant of the County, Colonel R C Stewart of Arndean. With a considerable amount of work taken on by the members, a further nine holes were opened on 31st August 1970. It was not long after attaining eighteen hole status that Muckhart Golf Club emerged as one of the fairest tests of golf in the Perth & Kinross area, and soon demands were put upon it to host prestigious County events.

In 1992, land adjoining the Golf Course became available for purchase, and the committee realised a potential for further expansion. These nine holes were officially opened on the 25th July 1998, and completed the magnificent 27 hole heathland golf course that we know as Muckhart Golf Club. 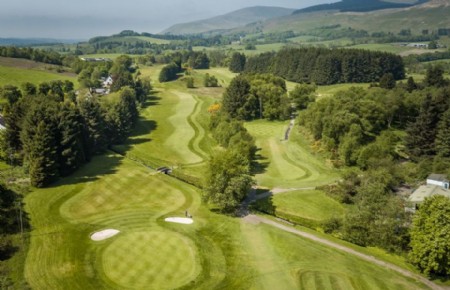