18 Hole Par70 Parkland Course, Pro Shop, Putting Area
Broomieknowe Golf Club is a parkland course founded in 1905 and located in the heart of Bonnyrigg, Midlothian just six miles southeast of Edinburgh.  It is an easy walking course that is the product of two of the greatest names in golf, Ben Sayers and James Braid.  The former originally laid out the course with Braid making extensions later on.  The fast-draining sub-soil helps to ensure that there are very few days when the course is not open and the tree-lined course is a test of all golfing abilities.

It sits on an elevated site and affords good views of the surrounding countryside.

Broomieknowe Golf Club was founded in 1905 and is set in magnificent parkland where the fast-draining sub-soil helps to ensure that there are very few days when the course is not open.

The original eighteen hole course was laid out by Ben Sayers of North Berwick.  In 1932, it was altered and extended by James Braid of Walton Heath, five times Open Champion.

The course remained largely unchanged until in 1992, as a result of the construction of the A7 bypass, a considerable part of the course was lost, but five new holes were constructed on adjacent ground, providing a fresh challenge to members and visitors alike.  Currently the length of the course is 6172 yards with a standard Scratch of 70.

Long renowned for the quality of the greens, the recent course reconstruction, increase in length and quality and definition of the fairways has provided a tough but fair test of golf to all levels of players.

A planned programme of maintenance and upgrading has seen the planting of several thousand trees to enhance and define fairways and hazards.  Additionally, during 2000/2001, extensive drainage work was undertaken and has resulted in the course seldom being closed, at any time of the year, due to waterlogged ground. 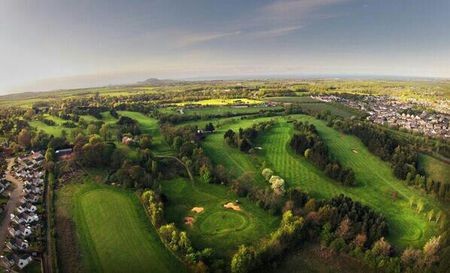