One of the true surprises of Edinburgh golf is the discovery of a delightful 12-hole short course in a quiet setting close to the airport. Starting life as a 9-hole course named Gogarburn Hospital Golf Club it now has 12 holes and was re-named Gogarburn Golf Club.

In 1974 a small golf section was formed among staff at the former Gogarburn Hospital. Two years later work was started by eight stalwarts of the newly formed golf club to burn off the waist-high grass in an area of the hospital grounds which they had secured for their own golf course. August 1977 was the first open tournament played over the original nine holes with an entry of 55. By 1983 an additional three holes had been completed and the entry in the open competition had risen to 210. This open tournament continues to attract 200+ entries each year.  All the construction and maintenance work was carried out by a small group of enthusiasts, starting with a £500 gift from the hospital.  Although the course is short it winds its way between huge trees in a beautifully secluded setting. The tenth hole skirts an enormous walnut tree against a background of rhododendron bushes. Several of the holes are played through an area where Cromwell conducted one of his many skirmishes, but the whole course has an air of peace and tranquillity.  Gogarburn is Edinburghs newest golf course and is worthy of a special visit. 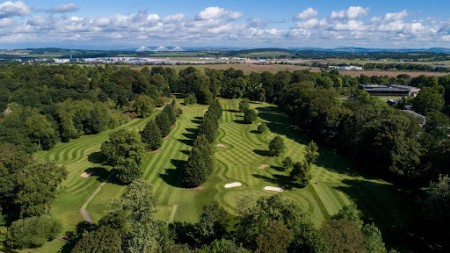