Scotland is a land of hidden gems  and for golfers Kilspindie Golf Club is one of the finest, lying hidden among the nature reserve of Aberlady Bay, the quaint village of Aberlady, and the teeming waters of the Firth of Forth.

Playing these traditional Scottish links, you may witness sea-birds diving for food, migratory geese, and seals sunning on the sand. In the distance, you can see the profile of Edinburgh, its Castle, and the long extinct volcanic cone of Arthurs Seat. The course is secreted away from the village via a few hundred yards of private, single-track road.

Kilspindie is a favourite of any golfer who has played it: quick, deceptive greens; well-defined fairways; a good challenge, whatever your handicap! Kilspindie has been host to an alternative Ryder Cup, with 12-man teams playing with pre-1930s hickory shafted clubs.

Kilspindie is reputed to be the 35th oldest golf club in the world, instituted in 1867. The charm of the 114-year-old is complemented by the warmth of the welcome from the Clubs Secretary/Manager Keith Martin, Golf Pro Graham Sked, Mrs Marion Harkness and her dedicated bar staff, and Paul Kinnoch and his catering staff.

Golf has been played over this piece of links land prior to 1850 but it was not until 26 November 1898 that the links was officially opened by Luffness Golf Club which was re-named Kilspindie Golf Club in 1899.

The links were designed by Park and Sayers with minor modifications over the years. What is interesting, for example is that the first hole, par 3, is due north whilst the 2nd hole is the only par 5 and, when played into the prevailing wind from the south west, can play more like a par 6 or7! Imagine what it must have been like with hickories!!

How many courses can boast of a "magazine and a "target on their course and these small buildings were exactly that up to the end of the First World War when the local territorial army unit used the course in conjunction with the golf club  one had to be aware of other hazards in those days!

Every year some 27-28k pairs of feet enjoy these links and this is testament to its lasting design and layout.

Recognised locally, nationally and internationally Kilspindie is a hidden gem if there was ever any doubt! 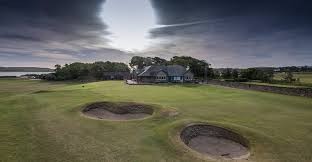